When I was an archer, a friend challenged me to write a short story that included both Vampires and Archery.  As we are in the Halloween season this seemed an appropriate time to post it. 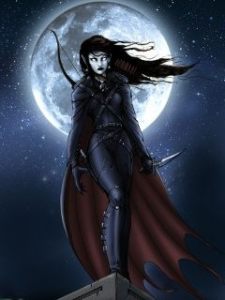 This wasn’t surprising as she hadn’t hunted for four days, and even that had come close to being a disaster.

Usually, as long as she didn’t laugh too openly and show her teeth she didn’t have a problem, especially as her normal haunts were bars or clubs with dim lighting.

Most men only noticed her beautiful figure and her 38DD breasts, which she displayed in low-cut tops, or her long, long legs which she showed to their best advantage in tiny mini-skirts, often paired with thigh-high boots.

Despite her outfits she still managed to look classy but generally avoided the rich businessmen, as they were too likely to be remembered and missed more quickly.

Her last excursion had started off as usual. She had gone to a new disco that had already built up a reputation with the younger set, and she knew it would be crowded.

There was no problem getting past the bouncers- they were too busy ogling her black leather outfit. Once inside she was able to use the crowd as cover while she picked out her victim.

She selected her target. The look on the poor guy’s face would have made her laugh if it had been safe to open her mouth wide enough.

When she made it obvious that she was giving him the come-on, he kept looking round to see if she was actually directing her attention to someone standing behind him. Finally he got the message and plucked up courage to talk to her, or rather shout over the noise of the music.

With a mixture of lip reading and gestures she eventually got through to him the idea of going somewhere quieter. He rather shyly took her hand as they left the club together.

She noticed the look on the faces of the bouncers as they went out, obviously bemused as to what a gorgeous girl like her was doing with a nerd like him.

Damn. That meant they might remember her. Hopefully they would just assume she was out to earn some money, and the guy was a rich eccentric who wasn’t able to get it any other way.

It was hard going but eventually she managed to persuade him she was a country girl at heart, and enjoyed nothing more than a walk through the woods at midnight. Either that or he finally thought it was his Red Letter day, and he was at last on a promise.

Although she had more strength in her little finger than most men had in their whole bodies, she was surprised by his power when he started stripping off her clothes. Propped up against a tree trunk she amused herself for a while as his passion grew, but then her hunger got too much.

Just as she was going to sink her teeth into the juicy throbbing vein in his neck he pulled away suddenly. “Hey. Who’s there?” he yelled. “Show yourselves, you perverts.”

From a nearby clearing two of the bouncers from the club suddenly came into view laughing their heads off.

Through the red haze of her need to feed she was tempted to take on all three men. She knew she could beat them easily but the bouncers would be too well known. They might even have told their colleagues what they were going to do and her cover would be blown.

Frustrated she took off. Before they could come to their senses she was already half a mile away.

She managed to drain a few rabbits and other woodland creatures, but that was just an apéritif, nothing like the satisfying taste of a full eight pints of O positive.

Hence the reason she had to lie low for a few days, and was now desperate for some sustenance.

Dressing more demurely than her usual outfits, she put on some black ski pants, a black T-shirt and threw a black leather jacket over her shoulder, before gliding down to a local neglected area.

It had been intended to be the site of a new block of flats. The old houses had been demolished but then the builders went bankrupt and the weeds took over.

Now it was inhabited by tramps and drug addicts, with the occasional passing gypsies. The travellers would have been ideal but for the fact they always moved in large family groups. With their distrust of outsiders it was too difficult to get one alone.

Although the gentlemen of the road were a better target there was still a community of sorts, so the timing had to be right.

Vanda picked her way carefully over the rubble, moving closer to the small bonfires scattered around the area. It would have been quicker to glide but she didn’t want to attract attention in case anyone was watching.

She had got to know the area well and could even pick out the regulars. Her attention was drawn to someone sitting right on the outskirts, huddled around his own fire, as if he was not sure he would be welcome if he tried to move closer to the main groups. Perfect.

As an immortal she had all the time in the world but she still found it hard to sit and watch her meal until, one by one, the fires died down and total darkness descended.

After that it was easy. There was only a tiny yelp as she sank her teeth in and sucked until his wrinkled frame collapsed, but at least she had dined royally tonight.

It was a myth that vampires were only nocturnal. Although she preferred the hours of darkness she had learnt how to deal with daylight. She still avoided the midday sun and preferred the overcast dreary days, which was why she lived in England rather than her hotter homeland in Europe.

So it was that she was wandering through the woods on a typical autumn day; cold, windy and with a drizzly, depressing rain coming down.

She had seen the ‘No Entry’ signs but ignored them. After all, human restrictions didn’t apply to her.

Suddenly she heard a shout “Fast.”

Intrigued, she looked through the trees to see a group of people all dressed in green and white, standing with bows in their hands, and sets of arrows in quivers hanging from their waists.

She had seen but ignored the other signs, ‘Danger. Archery tournament in progress. All visitors please keep to the footpaths.’

All the archers had stopped loosing their arrows and were gazing in her direction. Perhaps they were worried about law suits if they injured someone.

Vanda smiled to herself. There was no way a metal arrow could cause her injury or pierce her skin, even with a direct hit.

She had recognised the nerd from the night-club. He had a strange expression on his face.
Perhaps he was pissed off at her for not bringing help when he was left alone to face the two bouncers.

Their eyes met as very deliberately he raised his bow, lined her up in his sights, and loosed his wooden arrow straight at her.

In the seconds it took for the missile to reach her she realised this was a field shoot. They used wooden arrows, not metal ones.

Just before the wooden stake went straight through her heart she saw him as he really was, a werewolf, the timeless enemy of Vampires.

It was her last conscious thought before she shrivelled into dust.

Thanks for joining me.  Voinks.