Hearing this old song was the inspiration for the short story. 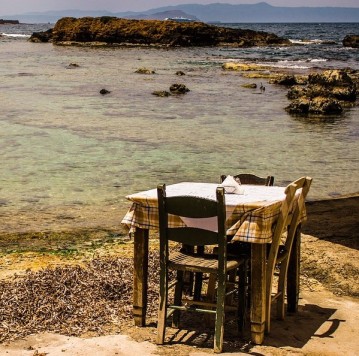 For old times’ sake I decided to pay one last visit to the small taverna where we had first met. It was when I was young and experiencing my first taste of freedom without parental control. Five girls, full of life, seduced by the sun, the relaxed atmosphere and the romance of sitting at midnight listening to music in the warm breeze, all ready and willing to fall in love under the twinkling foreign stars.

The swarthy Lotharios swarmed like bees around a honeypot, and we were enchanted by the local guys, so unlike the ones we knew back home.  Even Jenny fell for their charms, despite her marriage to her childhood sweetheart less than six months before.

Jackie flirted and had fun, but made sure she slept alone in her own bed. The sisters, Paula and Patricia watched out for each other, and hooked up with two English lads, brothers who were staying at our hotel. Both insisted it was more than a holiday fling, and in some ways they were right. Paula married Mike, had two children and they recently celebrated their silver wedding anniversary, and the birth of their first grandchild. Patricia married his brother John, but five years later they were divorced, which must have made joint family celebrations difficult.

I enjoyed myself but was too sensible to give my heart away to the many local lads who told me I was beautiful and swore undying love. Tony was different, watching over me like a big brother, and rescuing me when I found myself in a sticky situation. He served behind the bar in the evenings, helped out in the kitchen when they were busy, and was always there when I called in mid-morning for a coffee.

I discovered he took a fifteen-minute break around eleven, and got into the habit of arriving ten minutes beforehand so he could share my table. Although I think he was attracted to me he never made it obvious, but when we were alone we discussed our hopes and dreams for the future.

His ambition was to get formal training as a chef and open his own restaurant, preferably in London. I admitted my dream of running my own business, and told him about the evening classes I attended after work to learn the necessary skills.

In the evenings, when the fairy lights came on and the tables were set outside, a musician sang, and played romantic music to entertain the tourists and the older locals. Although Tony was busy serving drinks, I was happy to sit and listen while my friends went off to the discos and clubs more suitable to the younger set. When the last guest had gone he would put on some quiet music, and we would dance until the early hours.

Like all good things the holiday came to an end, and for a while we kept in touch. After a few years I graduated with my diploma in business studies, and although at first it was hard going, eventually I managed to set up and run my own successful business. I heard from Tony that he was leaving the island and going to study under a famous chef in Paris. He promised to send his new address once he got settled, but I moved house at the same time, and although I sent a letter to the taverna giving him my new details it remained unanswered.

Five years passed, and through the business I accidentally met the love of my life. We married, had three children, and in between achieved our ambitions. We were there for each other, supportive in the bad times and sharing the joy in the good ones. We were comfortably off, successful in our chosen careers, and yet, and yet….

Something was missing. With our hectic life-styles we hardly saw each other as we both jetted off to different destinations for important conferences. It became a standing joke that we needed our secretaries to book an appointment for our next meeting. Our last communication had been by Skype, as it often was these days. Even then, he was interrupted as we went to say goodbye.

‘Sorry, sweetheart. Something urgent has come up. Got to go. Bye,’ he said as the connection was cut. No “miss you,’ no “see you soon.” Had we reached the end of love?

Was that the reason I found myself here, in the quiet of winter, leaning over the rail to gaze at the beach below? It was very different now. The quaint old-fashioned shops had been replaced by modern glass and concrete shopping malls, the tiny restaurants and cafes by international, familiar chains.

Was it the salt spray or a stray tear I wiped away from my cheek? As my vision cleared I noticed a small hut below me, almost hidden by the rocks. It couldn’t be, could it? Was there any way the taverna could have survived the ravages of progress? It looked the same, but further back on the shore from where I remembered, but it had been twenty-five years, and memory can be a funny thing.

Despite my unsuitable shoes I determined to find out, and picked my way carefully down the broken stone steps until I was facing the rear staff entrance where I used to wait for Tony to take his break. Suddenly, tiny coloured lights came on, transforming the run-down beach shack into the romantic rendezvous I remembered. Unbelievably the sound of music drifted towards me as the door opened and a man emerged, carrying a small table and two chairs.

Although his dark hair was flecked with grey, he was unmistakable as Tony, the man who had stolen my heart at first sight, who I had met by chance several years later, and whose ring I had been wearing for more than twenty years.

‘I’m glad you came,’ he smiled. ‘I would have looked a bit stupid dancing by myself. Happy anniversary darling.’

As he took me in his arms, and I listened to the words of our song, I knew the dance would end long before our love did.

3 thoughts on “Dance to the end of Love”