With the start of the new year, I was wondering whether to change the format of my blog. After all, who is interested in reading short stories? Perhaps my time would be better spent working on the release of my two books due for publication this year?

The characters would have none of it, and insisted their story be told, so here we go: 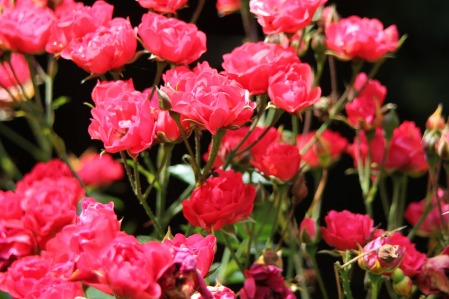 That’s what he promised me. The good-looking charmer who put silly notes in my desk to make me smile. As the newbie in the office I assumed the other women were jealous of the attention he was paying me and ignored their snide comments. He was everything a girl could ask for; tall, good looking, generous, funny and romantic.

He hit on me from the very first day, but not in a smarmy way. He seemed popular with all the staff, and I assumed he was including me in the banter to make me feel at home.

‘Hey, Rose. You’re joining us down the pub tonight, aren’t you? Payday tradition, last Friday of the month. If you give me one of your beautiful smiles I might even buy you a drink from my hard-earned wages.’

‘Leave the girl alone,’ Penny from accounts called back to him. ‘She’s probably got better things to do than start her weekend off in your company.’

I wasn’t sure whether she didn’t want me there, or was being supportive. In the midst of all the glamorous assistants, she was the only plain one, apart from me, of course. We were both overweight, but at least I had the height to carry it off. She was short and dumpy, and wore glasses all the time, whereas I only used them for driving. Still, she had been nice to me when I started, showing me where everything was, and taking me to the local sandwich bar on my first day.

‘Yes, I usually get dragged along. I’m the only one with half a brain to sort out the bill.’

I noticed her glance at the other girls as she said it, and although she was smiling there was a barb in her voice, as if she was getting in a dig at their intelligence.

‘OK. Why not? Give me ten minutes to cancel my hot date and I’ll be ready.’

‘We’ll see you in there. I’ll save you a seat,’ Rick called as the rest of the crowd left together.

It was only a short walk to the pub, and Penny took the opportunity to have a private chat as we made our way there.

‘What do you think of our Rick, then Rose?’ she asked as we left the building.

‘He seems pleasant enough,’ I replied. ‘What about you? Do you get on with him?’

‘Oh, he’s very good at his job. One of the best managers I’ve had. If you stick to work you’ll be fine.’

I’d already decided she fancied him, but was curious if it had ever gone any further between them.

‘He’s not really my type but he’s certainly good looking. Is he married?’ I asked.

‘He doesn’t seem to be. He never mentions a wife, and at the Christmas party he always has a different lady on his arm. I think a few of the girls have been out with him, but they never tell me anything about it, although I’ve heard them gossiping amongst themselves. This is the pub. Shall we go in?’

‘Hey, Rose. Over here. I saved you a seat as I promised. Now, what are you drinking?’

Penny and I made our way through the already crowded bar, and I squeezed into the bench seat indicated, as Rick went to the bar to get my white wine spritzer. The others were on chairs around the table but when he returned he took the place next to me in the booth, so close I could feel the warmth of his leg brushing against mine.

I wasn’t usually much of a drinker but that night I got a bit tipsy and he ended up seeing me home in a cab. He was the perfect gentleman, escorting me to my door and giving me a friendly good night kiss before returning to the waiting taxi. On Monday morning I was a little nervous at facing everyone, but although I caught some of the bitches smirking, Rick was his usual self.

‘What did you think of the pub? Not the most salubrious of places but it’s local, so I guess we dropped into the habit of going there. Perhaps next time we can go somewhere nicer. I know a lovely place down by the river which does a great Sunday lunch.’

Before I could ask if he meant all the crowd or just the two of us, the senior manager called him into the office. He was sent away on a business trip for two weeks and on his return spent most of the time in meetings so I didn’t get a chance to talk to him, although he always gave me a wink and a smile when he passed my desk.

I was transferred to another department so wasn’t sure if the invitation to the payday drink night still stood. If I went it might give me a chance to get to know Rick better but Friday afternoon I received an email from him. “Sorry, can’t make tonight. Explain later. Rick. x”

That decided me. There was no point in going if he wasn’t going to be there, so it would be better to go straight home and spend the evening doing housework. That would leave my weekend free for my first love, gardening. When Penny popped her head in just before five, I made an excuse I had a date that night. I’d heard nothing more from Rick until as I went to close down my computer another message popped up.

“Sorry for the short notice. Free Sunday? Pick you up at your place around 12 for lunch? Rick. x”

For a moment I wondered how he knew my address until I remembered he had taken me home, so after sending a quick reply, “Fine. See you then,” I left work in a tizz, already trying to decide what to wear.

He arrived right on time with a beautiful bouquet of flowers, the food was perfect, the company amazing and I couldn’t help noticing the number of envious glances sent our way by the other female diners. Once again I drank a little too much, so it seemed natural to invite him in for coffee when he took me home. It was a beautiful summer evening and he admired the roses in my garden as we sat on the patio enjoying the warmth of the evening.

He stayed the night and although I was inexperienced his love making was wonderful. I woke around three to his whispered “Goodbye,” before falling asleep to dreams of happy ever after. I bounced into work on Monday morning but my good mood was shattered when, from inside the toilet cubicle, I overheard Camilla and Sandra discussing me.

‘Did you hear? He won his bet. All the boys are talking about it.’

‘What did you expect? Rick could charm the knickers off a nun, and it’s not as if she would have many other offers, is it?’

Unsure whether to believe them, I sent Rick a message saying I needed to talk to him urgently. He came round and admitted everything. Afterwards he explained how sorry he was and begged me to forgive him.

That was nearly a year ago. Now it’s definitely a bed of roses.

After I chopped him up and put him in the compost bin the roses are coming up beautifully.

If you’ve enjoyed this story, please check out my published books which you will find by clicking on the links below;

Alternatively, you could consider checking out my sign-up page, and be the first to know who’s winning the battle between the characters and the books.  😀

3 thoughts on “Bed of Roses”